After a remarkable run, the stock market has finally experienced some negative volatility. The last time we experienced anything like the past few weeks was in 2011. As you may recall, late that summer, one of the big ratings agencies downgraded the credit of the United States as politicians in Washington wrangled over raising the nation’s borrowing limit. Stock markets gyrated similarly to what we’ve witnessed in recent weeks before moving on to the generous rally lasting from January 1, 2012 – December 31, 2014 (during which time the S&P500 appreciated about 44%).

So what’s to blame for the most recent market tumult? Many are pointing fingers at China. Several things are happening in the east Asian country that have spooked investors worldwide.

First, China’s own stock market has been in a tail spin since early June (far worse than here). As of the market close on August 25th, the Shanghai Composite (China’s main benchmark index) had fallen by 42% in less than two months.

But the sell-off in Chinese stocks comes as no real surprise to many market watchers in the west. There has been a lot of reporting and warnings voiced about a Chinese stock market bubble over the past year.

Consider this: the Shanghai Composite began the year 2014 at a level of 2,116. By year end, the market had increased nearly 53% to 3,235. The momentum continued into the first half of this year with the index running all the way up to 5,166 by June 12th. That means that in less than 18 months, the benchmark index had climbed approximately 144%! Clearly there was market excess.

Since June, shares in Chinese stocks have come tumbling back to earth. Adding insult to injury, just as Chinese investors have been getting beat up by declining stock prices, it appears their economy is slowing from the break-neck growth experienced over the past decade. Data have been trickling out of the country suggesting economic activity has slowed significantly more than Chinese officials are willing to acknowledge.

China’s economy is now second in size only to the United States. Thus, there is some worry that weakness there could spread beyond the country’s borders and affect other parts of the world. That certainly is possible, but I’m not losing any sleep over it.

The reality is China’s economy had to slow down eventually. The country’s output was growing at an annual rate of over 10%not long ago.1 At that rate, it would double nearly every seven years. This was simply unsustainable. As the old saying goes, “If something can’t go on forever, it will stop.”

For further context, consider that economic growth in the US has been in the 2% range in recent years.2 So how much should we worry about whether China’s growth rate is really 5% vs. the official number of 7%?

As for stocks in the US, frankly, I’m not surprised at all that we’ve experienced a pull-back. The markets here have essentially gone straight up for three years (as measured by the S&P500) with very little fluctuation. This has put stocks in a range that appears on the expensive side historically, although, not by excessive amounts, especially considering that interest rates remain at rock bottom levels.

Over the past 12-18 months, we’ve been trying to tame client expectations by repeating much of what I just described (stocks appear to be on the expensive side). This basically means that prices have gotten ahead of fundamentals. At some point, to balance out, prices needed to either decline or simply flat line so the fundamentals could catch up.

Now, I understand why people get nervous. The Great Recession of 2008-2009, when US stocks declined by over 50%, is still pretty fresh in our minds. I can’t say with absolute certainty that stocks won’t go down significantly more in the coming weeks or months, but I think it’s far less likely than several years ago and here is why.

Leading up to the decline beginning in March of 2000, US stocks had gotten to extreme levels as a result of the tech/internet bubble. Companies with no profits, and in some cases no revenue, were trading at prices completely disconnected from reality. In the US today, stocks certainly don’t appear cheap, but they don’t seem to be way out of line either, as was the case in the early-2000s.

Leading up to the more recent decline beginning in October of 2007, stock prices weren’t so much the issue as was the financial health of businesses and consumers. As the housing bubble inflated in the mid-2000s, companies and people alike took on more debt than at any time in modern history. In-fact, the consumer savings rate actually dipped into negative territory for a time prior to the housing bubble bursting.

Again, today, these conditions don’t exist. Since the financial crisis, both individuals and businesses have shored up their finances in a major way. According to JP Morgan, household debt payments, as a percentage of disposable income, are at their lowest point in over 35 years. Likewise, the largest companies in the United States are carrying the lowest debt levels in over 20 years while simultaneously holding record amounts of cash.

These factors would suggest that a horrendous bear market is unlikely. But as I try to convey regularly, market corrections (defined as a general decline of 10%) and bear markets (defined as a general decline of more than 20%) are part of the investing game.There will be more of them in the future and no one will be able to predict them with any consistency.

But that’s OK. Remember why you invest in stocks in the first place. The answer is, historically, they have generated attractive returns. But somehow everyone seems to forget that the eye catching average annual returns include both up and down years. Looking back to the market returns since 2008 is a perfect example. Here is what the S&P500 has done annually since the Great Recession: 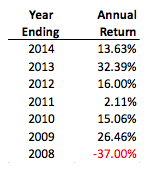 It’s amazing how the average works out to an attractive looking 9.81%. But please notice how the actual returns have fluctuated far from the average (emphasis added). There’s no reason to expect anything different in the future.

The last thing I’ll mention is you should really welcome market declines from time to time. Broad market selloffs often present attractive buying opportunities. This is why we really like portfolio managers who are willing to accumulate and hold cash at times. It puts them in a position to take advantage of these opportunities when they come along.

A number of our managers held significant cash positions going into the 3rd quarter. You can be confident that they’ve taken advantage of the recent volatility.

To conclude this discussion, volatility has finally found its way back into the markets, but it shouldn’t come as a huge surprise. The markets have been extremely generous over the past several years both from the standpoint of returns and stability. It couldn’t last forever.

Remember that there will always be something for investors to worry about. Several years ago it was economic weakness domestically. Then it was weakness in Europe. Today it’s China. Who knows what it will be tomorrow? The good news is occasional market declines create opportunities, and the portfolio managers we work with are favorably positioned to take advantage of them.

I’ll leave you with an excerpt from a New York Times column Warren Buffett authored in the midst of the financial panic of 2008 when he announced he was buying stocks and encouraged Americans to do the same:

Over the long term, the stock market news will be good. In the 20th century, the United States endured two world wars and other traumatic and expensive military conflicts; the Depression; a dozen or so recessions and financial panics; oil shocks; a flu epidemic; and the resignation of a disgraced president. Yet the Dow rose from 66 to 11,497.

You might think it would have been impossible for an investor to lose money during a century marked by such an extraordinary gain. But some investors did. The hapless ones bought stocks only when they felt comfort in doing so and then proceeded to sell when the headlines made them queasy.

We thank you for your ongoing trust and support. Remember that we’re always here if you have any questions about your accounts.

The opinions voiced in this material are for general information and are not intended to provide specific advice or recommendations for any individual. All performance is historical and is no guarantee of future results. All indices are unmanaged and may not be invested into directly. Securities and advisory services offered through LPL Financial, a registered investment advisor, member FINRA/SIPC. Trott Brook Financial and LPL Financial are separate companies.