The Stock Is Not the Company

Market volatility has returned. With it, increased fear amongst investors. I’ve heard it coming from our clients and can see it in the way financial media is reporting news. For example, at the end of Q3, Amazon reported another quarter of record profitability, yet a Wall Street Journal article on October 26, 2018 focused on “slowing” sales.

In the 3rd quarter, Amazon experienced sales growth of 29% compared to the previous year. However, the company warned the pace of growth could slow during the holiday season. One of the reasons for this is the company has now owned Whole Foods for over a year. Simply put, Whole Foods isn’t growing as fast as Amazon’s other segments, so naturally it pulls down the average.

If you owned a business that was growing at a 29% annual rate, and a recently acquired subsidiary pulled the growth down a few percentage points as expected, would you be concerned? To me the answer is obvious. But the greater point is, news like this can be spun positively or negatively. When the storylines start to flip from all good to all bad, it’s a sure sign that sentiment is changing.

With the apparent shift from greed to fear underway, now is a critical time to revisit the investment approach we wholly subscribe to, value investing, and why it matters.

Many people are familiar with value investing because of its association with Warren Buffett, but few really understand what it is and why it matters.

In the investment industry and in academia, value investing is typically characterized as an approach of buying stocks that appear statistically cheap. Over the past 30 years however, this characterization has fallen short as more and more names of high-quality businesses, often with impressive growth rates, have shown up in the portfolios of value investors.

Simply put, value investors figured out that it’s worth paying more for great companies. Warren Buffett has often described how his approach evolved over time from buying crummy businesses at wonderful prices to buying wonderful businesses at fair prices.

Although the characteristics of traditional “value” portfolios have evolved, what hasn’t changed is the core principles of the approach. The two fundamental tenants are:

Legendary investor Howard Marks puts it very concisely, “Figure out what something is worth, and buy it for less.”

The Stock Is Not the Company

Jeff Bezos, the founder of Amazon.com, became the world’s richest man in 2018 as the company’s stock price surged. In recent months, he sat down for a discussion at The Economic Club of Washington, D.C. During the conversation, Bezos touched on one of the core principles of value investing: stocks represent ownership in a business.

The interviewer, David Rubenstein, asked Bezos to reflect on the late 1990s when the “Dot Com” hysteria was underway. Bezos recalled that at the peak of the bubble, Amazon’s stock price touched approximately $113. Within 12 months, the price had collapsed to $6. That works out to a nearly 95% decline.

But what Bezos said next is the most important thing, “The stock is not the company, and the company is not the stock.” During the stock rout, Bezos described living in a parallel universe of a plunging stock price all the while Amazon’s actual business was improving rapidly. He ticked off numerous internal operating metrics such as, number of customers, profit per unit, defective products, etc., all of which were getting better!

We all know the rest of the story. In 2018, Amazon became one of the most valuable companies in the world. The company continues to expand rapidly, disrupt new industries and generate record profits. The stock price peaked at over $2,000 per share earlier this year.

Why a Value Approach Matters

Jeff Bezos’ comments distinguishing Amazon’s business from its stock price are profoundly instructive for investors, especially when the markets get choppy as they have in recent months.

The problem with publicly traded stocks is the vast majority of investors know almost nothing about the companies they own. Perhaps as many as 99% of market participants base all their investment decisions on one variable……stock price.

Unfortunately, as Jeff Bezos pointed out, the stock is not the company. In other words, although the performance of a company’s stock and its business tend to correlate over the long-haul, in the shortrun, they can move in opposite directions. This is why the principles of value investing matter…they provide a basis for making investment decisions.

My favorite example comes out of the 2008 financial crisis. It’s one I’ve shown clients repeatedly over the past few years and I’ll show it again because it is so vivid.

Now, let me change one fact: all three of these businesses are publicly traded. That adds one extra data point which has a tendency to make even the smartest individuals do really dumb things…a daily quoted stock price.

Take note at how three of the most dominant companies in the world experienced very positive business results during the 2007-2009 period all the while their investors went bananas in 2008: 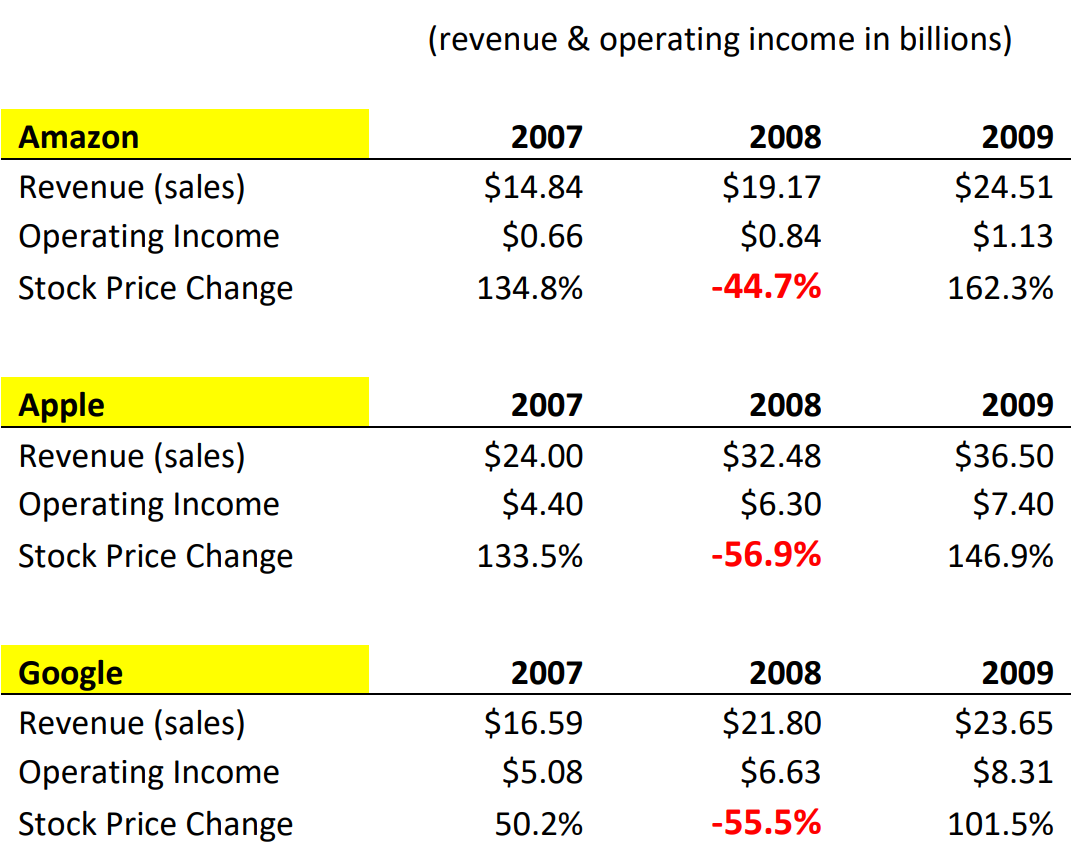 This extreme example demonstrates how investors lacking a sound basis for judging their investments may have easily made a catastrophic mistake in 2008 (and many did). Those focused solely on the stock price of any of these three companies likely concluded that something was very, very wrong.

Simultaneously anyone actually looking at how the businesses were performing operationally during this period would have been much better positioned to identify a buying opportunity of a life-time. This is what value investing is all about, maintaining a mindset and consistent approach for making informed investment decisions and managing risk. It matters more than ever when market sentiment turns sour.

I write this on December 24, 2018, and it appears the grinch may have stole Christmas, from Wall Street at least. Since early October, stock prices have declined. In-fact, the record long bull market appears to be finally over after roughly ten years. That said, I’m not losing sleep and don’t think you should either. That doesn’t mean stock prices can’t decline further, but we must remember that cycles have always been a part of financial markets. It would be utterly foolish to think this changed.

A bear market is commonly defined as a 20% or greater decline in stock prices broadly. Yardeni Research, a leading authority on bull and bear market data, pegs the total number of bear markets since WWII at eleven (based on the S&P500). If we include the current sell-off, on average, bear markets have occurred about every six years since 1946.

Despite all the market routs throughout history, the Dow Jones Industrial Average has managed to increase from a level of about 192 beginning in 1946, to today’s close of 21,792. That represents an over 100-fold change, not including dividends. When you look at some of these long-term market statistics, it’s hard to imagine how anyone could lose money on the back of a trend like that. Yet many have, and many more will in the future simply because people get scared and sell at the most inopportune times.

In March, I wrote a memo to clients highlighting some of the comments Warren Buffett made in his annual letter to shareholders. Perhaps sensing we were due for a downturn, Buffett pointed out that he paid $7.50 in 1965 for his first shares of Berkshire Hathaway. Earlier this year, those same shares traded for over $300,000, each. More importantly, Buffett emphasized that despite the massive appreciation, it wasn’t always straight up. In-fact, on four separate occasions over the decades, Berkshire’s stock priced declined anywhere from about 40-60%. From his 2017 annual letter:

The gyrations of Berkshire’s share price historically provide a few great lessons. First, it demonstrates that even the greatest investor in history has been unable to side-step the wild volatility that strikes financial markets somewhat regularly. But the more important lesson is…investors haven’t had to. When you own good assets that compound over time, the best course of action is almost universally no action. As Buffett’s business partner Charlie Munger said, “Never get in the way of compounding.”

As market turbulence carries us into 2019, I encourage you to recognize that big price swings have been anything but rare throughout the history of financial markets. Despite this, stock prices in-particular have trended up significantly over time. Something fun you can do to drive this point home is look up where the Dow Jones Industrial Average stood when you were born, took your first job, etc. It’s always quite surprising.

Also, remember the principles of value investing. This approach is all about providing a framework for making informed investment decisions. If you understand the first core principle, as Jeff Bezos put so succinctly, “The stock is not the company,” not only will you be much more at ease when prices slide occasionally, but you’ll be much more likely to execute on the second, buy at a discount. This is critical because in a somewhat cruel twist, the best bargains tend to be found when most investors are heading for the exits.

This commentary is provided for informational and educational purposes only and is not to be considered investment advice nor a recommendation of any investment product. Trott Brook Financial Inc. (Trott Brook) is, a registered investment advisor and provides investment advice to clients on an individualized basis. Advisory Persons of Trott Brook may also offer securities through LaSalle Street Securities, LLC (“LaSalle”), a FINRA/SIPC member broker-dealer. Trott Brook and LaSalle are unaffiliated separate legal entities. Information contained in this commentary may be opinions or forward-looking statements, which may not occur as suggested.